Orin was now completely flummoxed. He had tried to do the double knot that Master Georg had taught him and had created, instead, a tangled mess. Unfortunately, he had bitten off all his fingernails the night before in anticipation of today’s test so the rope was proving even harder than usual to untie. Finally, even though the whole royal court was watching, including the princess, he had to resort to using his teeth, succeeding in working the knot loose just in time to dive out of the way of the giant bird’s talon which was clearly aiming for ripping his heart out. 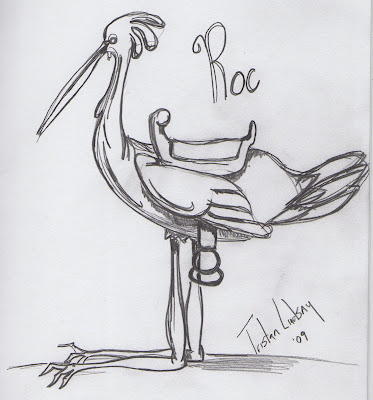 The downside of diving away from certain death is that usually one ends up with a mouthful of stadium sand. The upside is that you don’t usually die. Today was no exception. As he coughed up the sand, Orin noticed that the bird had in fact drawn blood, though just on his shoulder, where he could both successfully ignore it, and more importantly, look good while doing so.

He saw the shadow turn on the ground and rightly assumed the bird was coming around for another pass. He crouched low and reworked the rope, this time tying the knot correctly. As the giant bird flew toward him, Orin braced himself for the impact.

The bird’s talons scraped into the ground sending up clouds of sand and the crowd gasped as the Roc’s wings blocked their view. The great bird clutched Orin in its claws and took to the air once more. One thing that it did not notice is that Orin had slipped the rope around its leg and pegged the rope to the ground.

The Roc only got so far before the line went taut and it fell to the earth surprised. Luckily it had dropped Orin who was now in the process of getting the saddle ready. After that it was just a matter of stealth as he adjusted the belts and buckles to the bird. Finally, he drew his father’s sword and cut the rope sending the bird skyward with a screech. He could hear the roar of the crowd as he looked down from the back of the bird, wind blowing through his hair. He caught sight of the shining yellow hair of the princess as he flew away to thunderous applause.

“After all that,” thought Orin. "She’s still talking and laughing at the stupid count Drummond’s jokes." He sheathed his sword and turned the bird towards the west.